Coming to Lake Walyungup January 2014 the...

In January 2014, the next edition of the blokart World Championships will be held on the dry lake of Lake Walyungup, near Perth, Australia. The fourth championships will be the first held in Australia, a country that regularly has over 80 blokarts competing at its national championships. With over 150 competitors expected now is the time to join in and get racing." 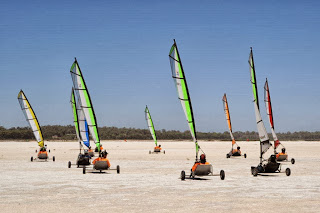 I will be driving from Melbourne to Adelaide then and hopefully dropping into the Extreme Kites Kingston meet!