I was down at the Salt Lake yesterday just after 6am and left just after 9am.

For the first half an hour there was no wind, I couldn't even get the 5m Flow to stay in the air - it gradually picked up and I eventually got moving, slowly at first!

Through-out the rest of the time the wind could be pretty hit and miss with the kite being powered up one minute and drifting the next. At about 8.15 a couple of cars turned up from the model aero-club and started buzzing around with their toy planes! This limited the area I could fly in!

After a while I decided to head back towards the car park and in the buggy took an alternative route - it was great fun as it took me over some rough terrain and I needed to pick my way between the rocks and bush as well as tacking to keep going in the right direction with the southerly wind (see diagram!). 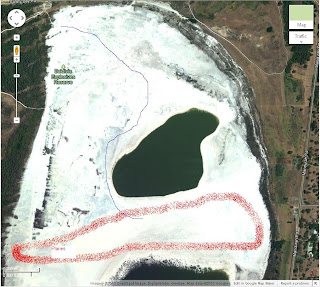 The red area was where I was flying and the blue line is the course I took back to the car park - but with more turns due to the southerlies!