After a record breaking warmest and wettest August we are set for a few more days of showers before we get some sunshine and the spring weather really kicks in...

From the West Australian 30th August 2013
"The Weather Bureau’s history books are set to be rewritten tomorrow as Perth prepares to see off its warmest August on record.

If the mercury reaches 19.5C – the forecast top is 22C – Perth will have enjoyed its highest average August maximum since records began in 1897.

Barring an unexpected and dramatic cold change, four of the hottest five Augusts have come in the last seven years.

Earlier this month, Perth slept through its hottest August night on record, when the temperature bottomed out at 17.1C on August 7.

But it has also been the wettest August since 2004, with more than 160mm of rain compensating for a dry start to the winter.

Bureau spokesman Glenn Cook said the unusual weather was due to the unusually warm water off the WA coast.

“The winds have maintained their direction off the water so you tend to get warmer conditions, because those sea surface temperatures are a bit above average,” he said.

Perth had its biggest August downpour in a decade on August 8 when 45.4mm of rain fell on the city over a 24-hour period.

The deluge also reached most of the Wheatbelt and South West, lifting the spirits of desperate farmers and causing several rivers to flood.

The Bureau expects more warm weather over spring, forecasting a 75-80 per cent chance of above average minimums."

I'm just hoping after the rain of the last week that the lake is going to be dry enough tomorrow to buggy on as we have some wind forecast... 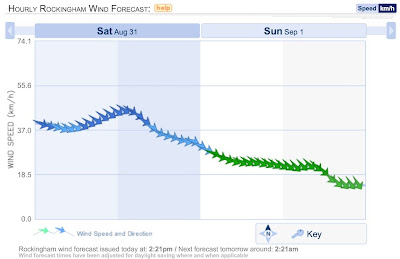