I have been trying various kites to really try and push my speed, I own a 3m Peter Core and have also owned a Peter Lynn Vapor 2.7m – until it pulled me out the buggy.

When I sold the vapour I was looking at where to go next and to try and fill a gap in my quiver – I initially ordered a 4.4m Peter Lynn Reactor II, but this was out of stock, so I was offered a 4m Ozone Method for the same price (saving about $100) – I jumped at the chance, I already have an Ozone Flow and in a previous life had a Ozone Samurai and I have always loved the stability and build quality of both kites. 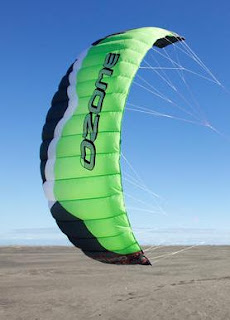 The Method is billed as having that stability but with race-car performance. We would soon see…

Kite Power have always offered fantastic service and the kite had arrived within a couple of days. The kite comes in a similar bag as the Flow, different colour and graphics. And comes with, 20m lines, handles, a strop, key-ring, instructions, stickers and repair kit. No kite-killers. 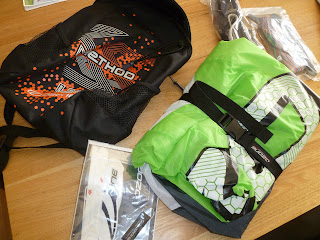 I took the Method to the footie oval to attach the lines and have a quick go! Like all Ozone’s the Method has numbered lines to make for easy set-up. But true to form I still managed to get the lines twisted and tangled just unwrapping them from the winder - this is why I para-pack!
Once the lines were attached the kite sat there partly inflated, the Method has its air intakes covered by mesh like my Flow but unlike the Flow only has seven. It has the familiar dirt-outs at the end of the wing tips and the Velcro to hold the bridle when packing. 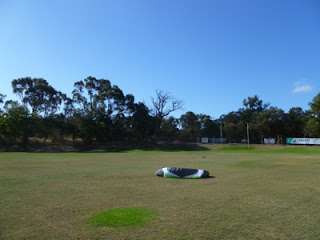 The construction of the sail is immaculate with not a seam out of place or a single loose thread.

A quick tug and up it went, even flying static the kite was quick through the air and turned easily without brakes and with a bit of brake would spin in its own length.

It looks incredible the graphics are great and I love the green, with the sun behind it and against the sky it is an awesome looking kite. The handles are the same as my Flow and were reassuringly familiar – I do prefer the Ozone handles to those of my Core.

Despite gusty conditions, the kite was great to fly and definitely develops some serious power and speed. I couldn’t wait to try it in the buggy...

The first flight in the buggy and I was down at the salt lake just after 6am, there was a reasonable easterly forecast and I was determined to put it through its paces.

Most of the time it was under-powered but behaved well and would get me moving at a reasonable pace with a bit of sine-waving! A few times the wind would come to the party and the true speed and power of the Method would become apparent - then it would switch off and the kite would float gently down!

Ozone kites don't seem to bow-tie! Well neither of mine do, the tips may fold in a bit but are easily shaken out again! I have even inadvertently let go of the handles (I think I went to hook in and missed!) and ended up chasing the kite as it tumbles across the ground. On catching the handles and a couple of tugs the kite is inflated without being wrapped in the bridles – maybe I was just lucky!

The wind direction meant that I could use the whole length of the lake. With the wind dropping I put up the 5m Ozone Flow and used that to buggy back up to the car park - no long walk for me! 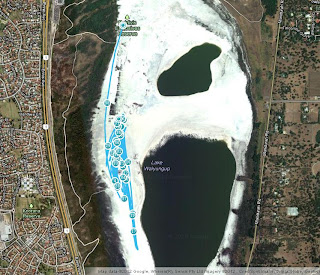 Since then I have taken it out in varying wind conditions and really got some great use out of it, I have hardly used the 5m Flow and the PL Core hasn’t been out of the bag! The Method has a huge wind-range, but this does mean that it does lack some of the lower end grunt; but once you push it and get it moving through the air the speed and power start to build – quickly.

Up-wind performance is good; I usually just stick the kite into the zone and let it do all the work.

Along side the performance it has the stability that makes it such a joy to buggy with, it feels like my flow, but on steroids, you can set it on a track and it just keeps going, finger tip control to reposition or to sine-wave and I just know what this kite is doing without having to keep looking at it.

It offers minimal lift, so I have no hesitation in pushing it up to the top of the window to slow down or flipping it through 180 degrees to slide the buggy. Don’t get me wrong this kite is not all sweetness and light – there have been occasions when it has got scary and threatened to kick my arse! But my confidence in the kite has enabled me to hold onto the side-rail of the buggy with one hand and control the kite with the other and keep on trucking, rather than sprawling in an undignified manner on the ground.

Ultimately I hope this kite is going to allow me to push my speed and increase my personal best, I know since owning it my average speed has increased and I am already starting to get some kilometres under my belt. 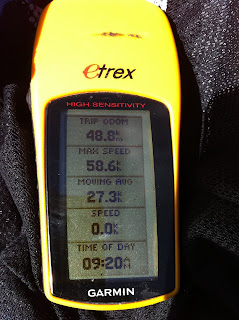 If you are looking for a kite with great performance, but none of the real aggression or temper of a full blown race-kite, that is stable and user friendly, coupled with fantastic build quality and great looks - then you can’t go far wrong with the Ozone Method. I hope that I will be able to add a couple more to my collection!
Posted by Unknown at 14:09