I was after a low wind engine for my buggy, to enable me to get out more over winter, my original idea was a 6.5m Ozone Method, but then found the Manta II on Kitepower.

I am pretty much a newbie when it comes to flying depower kites, though did previously own a Flysurfer Rookie 2 9m back in the day! So this was also going to be a bit of a learning curve for me. 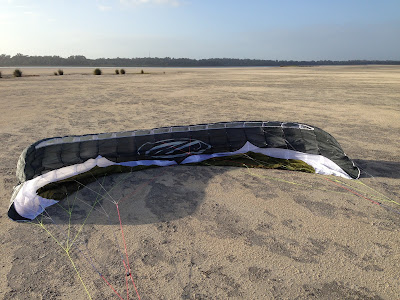 I spent some time trawling the forums for reviews and opinions of the Manta, especially as it is an older kite (2009) and didn't come up with anything negative. A phone call to kitepower who answered all my questions and I knew that I had to have it (it was also a good price as it was older model!) - Credit card details handed over and it was on its way to WA.

As always with kitepower it had arrived within five days ready for the weekend. A very impressive bag with room for at least a couple of kites, external pockets, the customary Ozone key rings and stickers. Some Velcro loops on either sides for the bar and the 5th line safety (as well as the kite, lines, bar and instruction manuals). 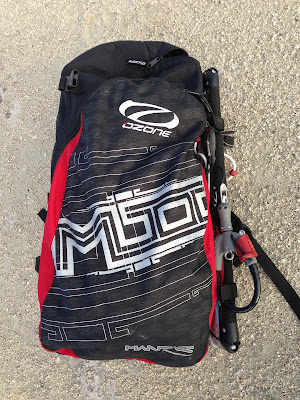 I took the kite over to the footie oval to attach the lines, set it up and if the wind is cooperating give it a fly. Thankfully set up was straight forward with the lines numbered - but somehow I still managed to get the bridle twisted, but more about this later.

I had already converted my Ozone Access SB harness back from a roller to its original spreader hook designed for the Ozone Megatron Chicken loop.

The wind on the oval is notoriously lumpy - but after a bit of perseverance I got the kite up and moving. Though a couple of times would drift to the ground due to lack of wind. When the power did kick in the kite showed some of its potential, it pulled well and was pretty quick through the turns despite its size. But I was just playing and getting used to the bar.

Overall, I was very impressed the kite had the usual excellent Ozone quality, crisp fabric, excellent seams with no loose threads. The air intakes are massive and have internal cross-bracing. The bridle and Ronstan pulleys are all top quality. And the things like the Velcro tabs to secure the bridle, the wing tip dirt outs just show Ozone’s attention to detail. The only downside is the bile green colour! 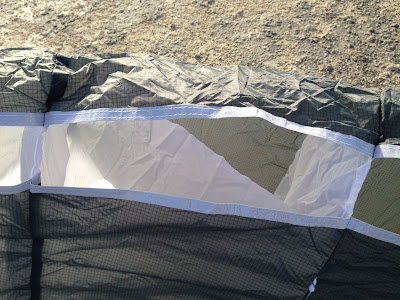 The bar is the 54cm carbon bar, EVA foam covered and colour coded, which includes - Megatron Chickenloop with top spinning Handle to untwist your lines after rotations or bar spins, easy to land brake handle, leashless re-ride safety system,  line trimmers - to fine trim while flying, high Quality stainless Ronstan pulleys. It looks and feels great with fine trimming on the lines as well as a clam-cleat trimmer. 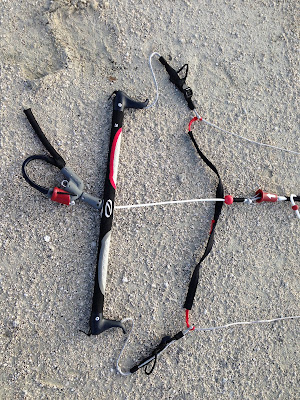 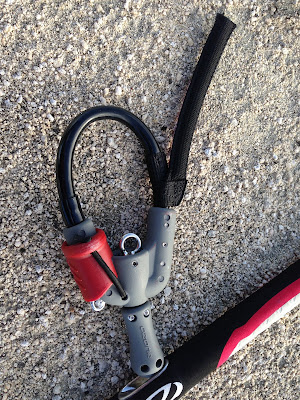 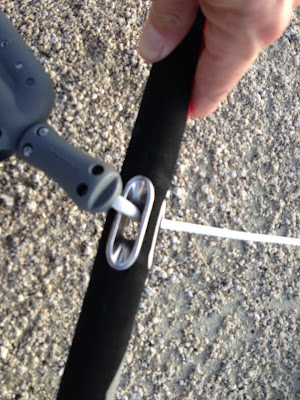 First time out in the buggy, the winds were pretty non-existent to start with but my perseverance was rewarded as it did pick up – but stayed at the lower end of the Manta’s wind range approx12-13kph according to Willy Weather). Easy to unpack and set up down on the lake – took a bit of walking backwards to launch but that was due to the low wind. Later on as the wind increased, it was easy to launch.

The kite did get me moving and developed some apparent wind as I moved it through the window. I loved flying hooked into the bar and the kite responded well to the bar and didn’t feel big or sluggish. The feel on the bar was light but you could feel it respond to gusts and depowered towards the top of the window as I didn’t want any lift, and pulled it in for more power and speed as I dropped the kite down.

It was during the first half an hour I noticed that the right hand wingtip kept collapsing and folding in and noticed from the buggy that the bridle on the right didn’t look the same as the other side (the wind tip folding is noticeable in the video) and didn’t really affect the performance!

I landed the kite staked it out and with it sat inflated on the ground and went and inspected the bridles. Somehow in my initial set up I had got the bridle twisted and looped through itself – after a couple of minutes of fiddling had it the sorted – no more wing tip curling. I have to say that it didn’t affect the performance or handling!

Since that first flight I have been out with the Manta II in varying conditions and from very little wind in which the kites has taken plenty of work to get it moving and most recently in wind that was ranging from a recorded gusty 12-26kph so getting right to the top end for a 10m Manta.

The kite performs really well in the buggy, it develops lots of power throughout the window, turning is quick and precise the kite feels stable and user friendly with its ease of launch, it will sit comfortably at the top of the wind window with very little input and is also simple to land and reverse launch if needed.

The feedback through the bar is positive and I can really feel and counter the gusts and the depower range is impressive (remember this is my first depower!) as the kite can go from fully powered and pulling like a train to very minimal pull. I am overcoming my fear of flying a big kite, well...

With my lack of experience I would often find that I’m still leaving the bar fully out (depowered) as I set off and finding that there is not much power and I’m not moving anywhere fast! Then pull it into a neutral position and things start to happen.

At the other end of the spectrum when the kite has been fully powered I am hanging onto the bar with grim determination, hammering along, with the bar in the powered position – thinking I’m going to die! Then realising and releasing the pressure on the bar and feeling more in control again! This is more down to my lack of experience with depower than any fault of the kite!

I am avoiding any lift, which is why a lot of people use a depower and haven’t felt at any point that I am going to leave the buggy, in this respect I think my bar work has been exemplary! Powering up as I drop the kite down into the window and for that extra burst of speed and then depowering as I push the kite up in the window to turn.

I am confident that as my experience increases I will push this kite harder, so far it has proven itself as a low wind buggy engine and got me moving when my other kites wouldn’t. But with its huge wind range it is so much more than that. I love flying on the bar, the fact that you can sit back and cruise, but a simple pull and the power increases and you get one of those woohoo! Moments. Once again the Ozone build quality is first rate, the bag and bar really finish the whole package. 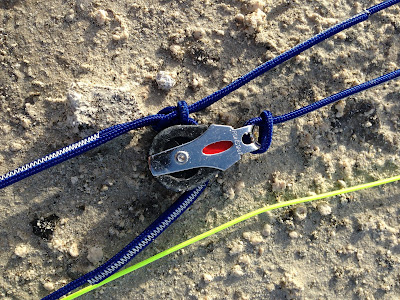 The kite is powerful, exhilarating, but has the stability and predictivness that I like. The huge wind range is going to mean that it is probably going to be the kite I use most frequently – even more than my trusty 4m Method!
Posted by Unknown at 08:00