I woke to blue skies, sunshine and a slightly chilly southerly wind (but at leasts its blowing). But after all the rain this week and partucularly the last 24 hours, Lake Walyungup will be to wet to buggy on...

From the West Australian 14th September 2013-

Perth's start to spring a washout

"Perth has almost received the average September rainfall total less than halfway through the month.
According to the Bureau of Meteorology, 80.6mm of rain has fallen on the metropolitan region since the start of the month.
The average rainfall for September is 80.9mm.
Perth recorded 20mm of rain in the 24 hours until 9am today, 44.8mm fell at Gingin Airport and 40.6mm at Busselton Airport.
Strong wind was recorded on Rottnest Island, with a 95km/h gust sweeping across the coast just after 12pm.
A 93km/h gust was recorded at Cape Naturaliste, 74km/h at Cape Leeuwin, 72km/h in Ocean Reef and 70km/h on Garden Island.
Perth can expect isolated showers in the morning and a maximum of 19C tomorrow.
Meanwhile, bushfire warnings are in place for people in Fitzroy Crossing and motorists travelling along Gibb River Road through the King Leopold Ranges Conservation Park." 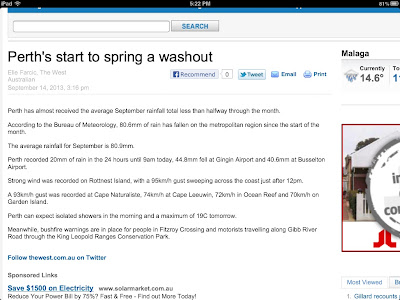