After completely trashing my tires on the salt lake, I think it is time I bought some new ones.

I have standard barrows on at the moment but am considering getting some midi's - my dilemma is will they make any noticeable difference, improved traction which may result in increased drag and slow me down?

I fancy a set of midi's as they look nice, but the barrows will be cheaper and I don't want to affect my performance! 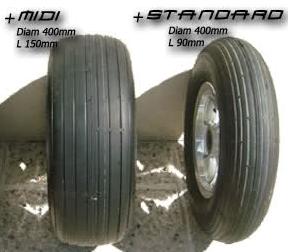 After some posts on three forums - the Pom's and the Yanks say go for barrows, racekites.com, power kite forum and the Aussies say go for midi's, extreme kites.

The Aussies argue that the midi's are going to more hard-wearing than barrows (they also look good!), I think at the end of the day it will come down to funds available!

I think I will go with the majority and go for another set of barrows, cheaper to start with and replace, and as I am constantly trying to edge more speed out of the comp I need every advantage I can get! Ultimately I need a wide axle or a better buggy so that I can push that bit harder.