a Sysmic S2 at the weekend. 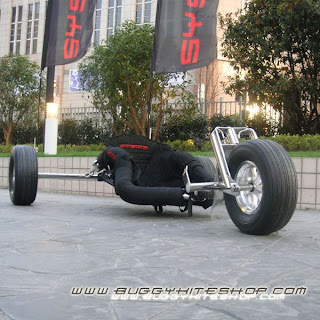 This buggy belongs to Bones, from Extreme Kites, he has had it for about a month or so now and very kindly let me try it while he used mine.

Wow - what a hip hugger, I have lost weight over the last couple of weeks but still had to squeeze between the rails and was then held nice and firmly. The seat was great and the back support did exactly what it was supposed to - supported my back. I could still shift around to reposition my weight.

The wind was gusty, a southerly that would have you powered up one minute and the kite drifting slowly to the ground the next. I had started off on the 5m Ozone Flow, but when I had ago in the Sysmic I was on the Peter Lynn Core 3m - this kite can be temperamental and really didn't like these conditions much!

At times the kite was taking a lot of work to get the buggy moving, then it would gust and we be fully powered - this is where the S2 started to show it's value, the buggy pulled straight and thanks to it's hip hugging rails I stayed firmly in the seat. No lift and no lateral drift.

The increased stability over the PL comp was noticeable and this would definitely inspire me to fly much more powered up and I don't think it would be too long before I started pushing my speed as it boosts your confidence.

After only 15 minutes the wind was more steady and I was pushing harder, I found that with a slight shift of my weight I could un-stick the back and coax it into a slide - an essential as far as I am concerned!

The down sides-
The tyre pressure was a bit high (which Bones agreed after trying my bug and having a smoother ride!) so the ride was a bit jarring - easily rectified.

But again I have to say thank you to Bones for letting me have a taster.