We went down to Bunbury yesterday for the day (labour Day in Western Australia), which is about an hour or so from home.
We had a good time walked on the beach, did a couple of geocaches. Then discovered the car had a flat! 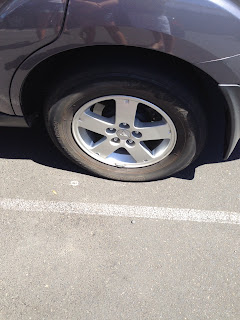 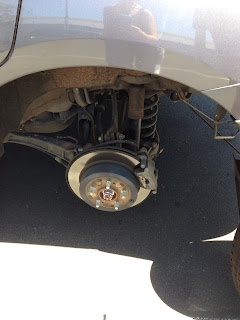 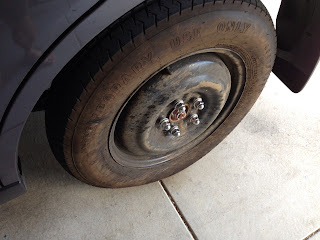 No hassle changing it and putting on the spare - the biggest hassle was the spare is a space-saver with a maximum speed of 80kph.

So driving home was interesting as the highway has a speed limit of 110kph and there was us cruising a long at a very sedentary 80kph - I did receive a couple of rude gestures! And what is it with big 4WD towing motorbikes and quads that think they can pull out and overtake at the very last minute? There were a couple of times I thought somebody was going to go into the back of us!

I did pass at least two fixed speed cameras (double demerits in WA over a public holiday weekend), with little signs up after you have passed them asking "Are you speeding?".

The journey home took just over an hour and a half  - but I think I saved some fuel!