After a 3 week hiatus because of holidays, lack of wind and a flat tire, today, I finally got out in the bug again.

The forecast was for increasing westerly's and decreasing showers. I was hoping that with the low winds early on I may finally get to fly the 8.5m Blade. Overnight we had had the first real rains of autumn and I thought that there maybe a few puddles to play in - boy was I wrong, Lake Walyungup was looking like a real lake!

So it was the 1km walk down to the flying area, paddling as I went and there was now no wind so I wasn't optimistic that even the Blade would fly.


Did you know that the wind often increases ahead of a shower? I'm sure I did but seemed to have forgotten this - as the wind gradually increased and the clouds look more threatening, I thought I should get a kite out and have a go.

Started with the 5m Ozone Flow as it was quite blowy. Flew for about 5 minutes before the first few big drops of rain started to hit.

Got the kite packed away and was heading to the shelter of the container used by the land yacht guys, when it fully opened up, I was soaked before I got there. By the time I made it to the shelter the rain stopped and the wind dropped off again!

Headed back out to dry off and try again - this time with the Blade! I forgot what a big kite this is and how long the flying lines are! But it is great - I was a bit worried about how well it would fly as I have read that they can suffer with bridle stretch which requires some modification. The bridle on mine looks new and the kite flew well and held a perfect shape.

The wind was still a bit low but the kite did pull and I was surprised how quickly I could get it to turn on the brakes. A couple of times the wing tips folded because of the low winds but were easily shaken out and recovered. I even had the confidence to try a reverse launch and a few runs in the buggy before the wind picked up and looked over my shoulder and saw a rainbow... 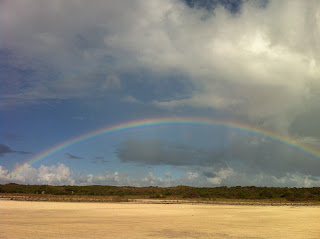 This time I managed to pack the kite away and get under the shelter before another shower hit.

This one was heavier than before and I was amazed at how quickly the lake disappeared, behind the veil of rain and also under a layer of water!

Time for morning tea while I waited for it to pass. Which after 5-10 minutes it did - this time the wind stayed, don't you just love it when they get the forecast right?

Started off again with the 5m Flow, blasting up and down the lake, through the puddles getting completely soaked and pebble-dashed (thinking I may need a splash-guard). The wind was pretty lumpy and gusty - so decided to pack the flow away and go for my weapon of choice, my 3m Core, this is quickly becoming my favorite kite.

The sky continued to clear the wind continued to blow, some of the water quickly disappeared. Had a great session then, just blasting up and down the lake, hitting the water, sliding the buggy and generally making the most of it. 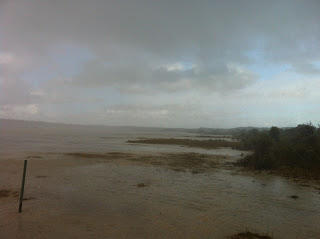 Then I hit the wall, lack of food and drink and had been out long enough. Thought if my wife could brink some lunch and a cup of tea, after half an hour would of probably carried on playing - but didn't think there was much chance of that! So it was time to pack up and head back home.

Spent some time at home cleaning the bug and checking all the kites and lines were fully dry - ready for next time!