I headed down to the salt lakes yesterday morning as the wind forecast was looking OKish early on and building to howling in the afternoon. When I got down there at 8.30 there was not a breath of wind, I ended up walking the kilometre or so down to the wide open bit.

There is a wind speed/direction thingy on the container used by the land yachts and that wasn't moving - I thought it maybe a good chance to get the 8.5m blade out. Parked the buggy and walked over to the edge of the bush to inspect the ground! Then headed back to the bug ready to unpack a kite and woosh in came the wind!

It was going to be to much for the blade and unpacked the 3m Core! The wind was pretty off and on for the first hour with some major gusts and then nothing. Did pack the Core away and flew the 5m Flow over-powered and had some excellent runs. Then again the flow went away and out came the core - it was one of those sorts of days!

Alex and family came down at about 9.30 and again it was great to see another kite down there.

Got some decent speeds in the high 50's and some huge slides. Felt quite comfortable using both kites without the kite-killers, but as the morning progressed the wind and the gusts were getting stronger - so at around 11.30 decided that I had better play safe and tried to head back to the car park.

As I buggied away from the open area the wind felt pretty erratic in strength and direction and I eventually ended up with the kite parked in a big clump of the sea-rush. After untangling it, packed away and walked the rest of the way!

Today is my Birthday - but we celebrated yesterday. But I had to attach this picture of the card my girls gave me as it had me in absolute stitches... 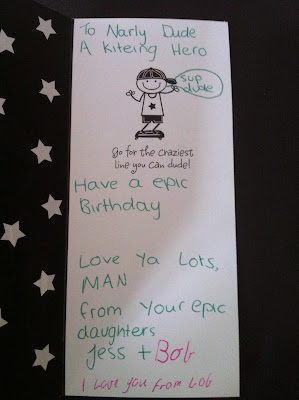