Finally, today I managed to crack the 60kph barrier and got a new PB! 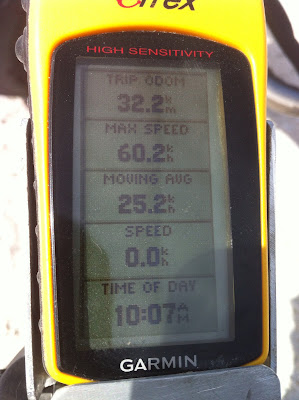 I was down at the salt lake by 8.30 this morning and hoping I was going to get chance to fly my new Blade 8.5m and the forecast was looking hopeful. But the wind was blowing a pretty consistent easterly so started off with the 5m Flow. It meant that I could buggy from the car park - I snuck past the model planes that were all grounded at that point onto the more southerly part of the lake.

Had some good runs with the Flow with the wind gradually increasing - stopped for a couple of hot-cross buns and decided to get the 3m Core out and try for some speed.

At first it was pretty hit and miss with the Core, but the wind continued to increase and so did my speed. Until I had what felt like a perfect run...

Slightly down wind, the bug felt rock solid and cruising, eased off at the end and looked down at the GPS - 60.2kph! I couldn't believe it! A few whoops of delight, that wasn't scary at all! Just the perfect run, everything felt right.

Had a few more runs after that using the whole length of the lake, as the model air-plane dudes had all moved on, then started to feel tired - must be as the adrenaline of that run had worn off! So buggied back towards the car park.

As I said it was not just good Friday but...
Awesome Friday!