"A promising teenage soccer player was impaled through the eye by a kite being flown by a stranger in a freak accident as he walked home from soccer trials.

Iain Carmichael spent his 17th birthday on November 28 in the intensive care unit of Sir Charles Gairdner Hospital. On that day he woke from life support - a birthday present for which his family will be for ever thankful.

It certainly was not the present they were expecting two weeks ago when Iain, walking home from soccer trials in Secret Harbour, had a kite smash through his eye socket to his brain.

The family flying the kite rushed to help the teenager, who was instantly paralysed.

Iain was taken to Fremantle Hospital before being transferred to Sir Charles Gairdner Hospital for specialist treatment. His eye miraculously appears to have suffered little damage but his family are anxiously waiting to see whether a grey patch on Iain's latest brain scans will bring good or bad news.

"The first few days in intensive care, we were just wrecked," his dad Robert Carmichael said.

"We just didn't know what damage had been done and now he's had a few brain scans but it's still a waiting game.

"They don't know if this grey patch is hiding behind the bleeding or it's just reappeared. It could be either brain cells repairing themselves or dead brain cells, we won't know until the next scan."

The right side of Iain's body remains paralysed but he has been able to give his family the odd smile and a few words.

Mr Carmichael said he hoped his son's strong fitness levels would work to his advantage as he continues to recover and was proud of what his son had achieved.

"He's fit and he's healthy and I'm glad he's done all that training to make himself strong," Mr Carmichael said.

The 17-year-old, who moved from Scotland to Perth with his family four years ago, graduated recently from Safety Bay Senior High School and was looking forward to pursuing to play soccer professionally.

A star player for Mandurah FC and his school's acclaimed soccer academy, he recently won the school's best and fairest player for the year and had interest from American colleges about soccer scholarship opportunities when he turned 18.

As a member of Football Tech's elite academy he was picked to travel to Brazil to train with Desportivo in 2010.

Iain was also toying with the idea of going back to Scotland to do further training ahead of possibly moving to America. 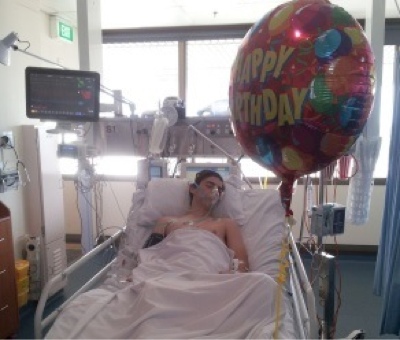 Picture courtesy of he West Australian
Posted by Unknown at 09:00